Review of our second ‘Instruments of the Eighteenth Century’ seminar

Our next seminar takes place on Wednesday 15th November, 1-2pm at the Bate Collection on St Aldates, and features Douglas MacMillan and Isobel Clarke speaking to the title ‘Instruments of Love’, with live musical examples using recorders in the Collection.

Wednesday 8 November was the second in the lunchtime seminar series, held at the Bate Collection, and organised by Alice Little, for RECSO.

We were privileged to hear an erudite and entertaining talk from Francis Knights, a harpsichordist, musicologist and editor, from Fitzwilliam College, Cambridge. The talk was titled ‘Instruments of emancipation: the changing uses and roles of keyboards in the 18th Century’. Dealing as it did with ‘indoor’ music entertainment, this provided a good contrast with last week’s talk on the louder, outdoor, martial music.

Francis Knights covered several aspects in discussing the changing roles of these instruments, including larger developments in society, as well as smaller social changes. He began by reminding us of the role of Empire for English instrument-makers, giving rise to access to rare woods and ivory for creating clavichords and harpsichords. This could be clearly seen in the elegant Bate Collection clavichord, which had ornate diamond ivory inlay in the keys.

He moved on to linking the growth in instrument production to the rise of the middle classes, and describing how developments in printing could cater to a wider market for music making, making available cheaper copies for this expanding market. Of course we all think of those Jane Austin adaptations, where the daughters were expected to have ‘accomplishments’, including playing a keyboard and singing. But who knew that there was a whole area of music publishing aimed at this very audience: the ‘Damen Sonaten’, composed by such as C.P.E. Bach. This repertoire was not technically less demanding than a normal sonata, and was as emotionally deep, so the question was raised, what was so different about these pieces? Perhaps it was only a marketing gimmick, in a world where for the first time composers could make a living composing pieces for and selling them to the expanding middle classes (or ‘middling sorts’ as we historians say) and thus do away with the need for an aristocratic patron.

The rise of printing led to advertisements, both for instruments, and for the new public concerts; our very own Holywell Music Room is a good example of an early public concert space.

Knights also touched on the rise of the celebrity teacher, which led to the professionalisation of music teaching, with the teacher going around to the private houses of those young ladies in need of music lessons. 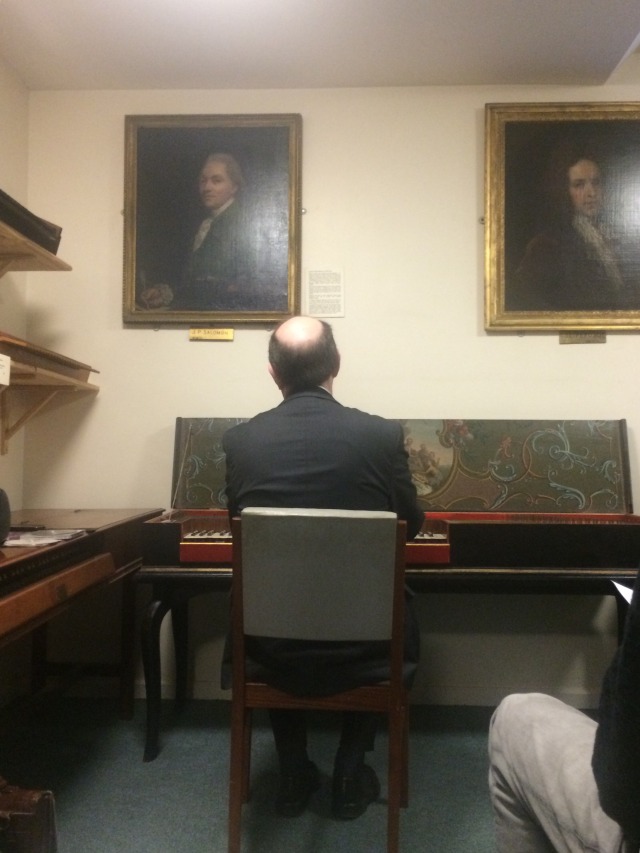 Finally some interesting asides: did you know the young Verdi learnt to play on a harpsichord? Or that Beethoven stated that his early sonatas, up until 1803, could be played on either harpsichord or piano? Or that the fact that Miss Tox, in Dickens’ Dombey and Son, was playing the harpsichord in the 1830s signified her old-fashioned outlook?

The talk was interspersed with several expert performances, finishing with a very convincing interpretation of a Haydn sonata movement played on the harpsichord rather than the usual piano.